Doug Landis knows a thing or two about how to tell a great story. As the former Chief Storyteller at Box, Doug is an expert at crafting slide decks that tell compelling stories and take audiences on a journey. Today, as a Growth Partner at Emergence Capital, Doug has helped our team at Guru refine our storytelling chops, and he’ll be joining us at our upcoming conference Empower to discuss how storytelling should be the backbone of any revenue-centered culture.

When we saw the pitch deck connected to the infamous 2017 Fyre Festival, back in the headlines recently thanks to documentaries from Hulu and Netflix, we immediately wondered, “What would Doug think of this pitch?”

We sat down with Doug to talk through what it takes to tell a great story; what the Fyre deck got right; and where it fell short. You can click through Doug’s comments on each slide below, download it here, or keep reading for an overview.

If you think about great stories, all great stories paint a picture and take the audience on a journey. When crafting a great story, the first step is establishing a structure to help the audience understand where you’re going on that journey. Anyone can tell a story, but there’s nothing worse than listening to someone ramble on while you wonder, “Where are you going with this?”

You have to give people a clear structure because otherwise they’ll have a hard time following along with your narrative. A popular method of storytelling counsels using three steps: tell the audience what you’re going to tell them, then actually tell them, and then tell them what you’ve just told them. That means setting the scene by introducing a narrative, telling the actual narrative, and then summing up the narrative. Without structure, there’s no flow. Without flow, everyone is lost and confused, which is exactly how Doug says he felt after the first few slides of the Fyre deck.

A story without a clear structure ends up being a collection of facts. As we know in the world of storytelling, facts fade and people forget them all. It’s the stories that stick.

And stories that stick use contrast and concrete examples to paint a compelling picture. Great stories contrast what was to what is or could be, often using the word imagine. One of the most powerful tools in the world of storytelling is using contrast. By asking the audience to imagine a world where problem X is solved, you set the scene to walk them through your solution to that problem in a way they can connect with.

So, did Fyre succeed in telling a good story with their pitch deck?

The short answer: No.

The Fyre deck lacks a clear structure, a narrative flow, and paints no picture. In essence, this deck is missing a point of view. It doesn’t engage the audience’s imagination or take us on a journey. It jumps around from topic to topic instead of telling a cohesive story. They are trying to pitch a sexy new music festival. How can they tell that story effectively? 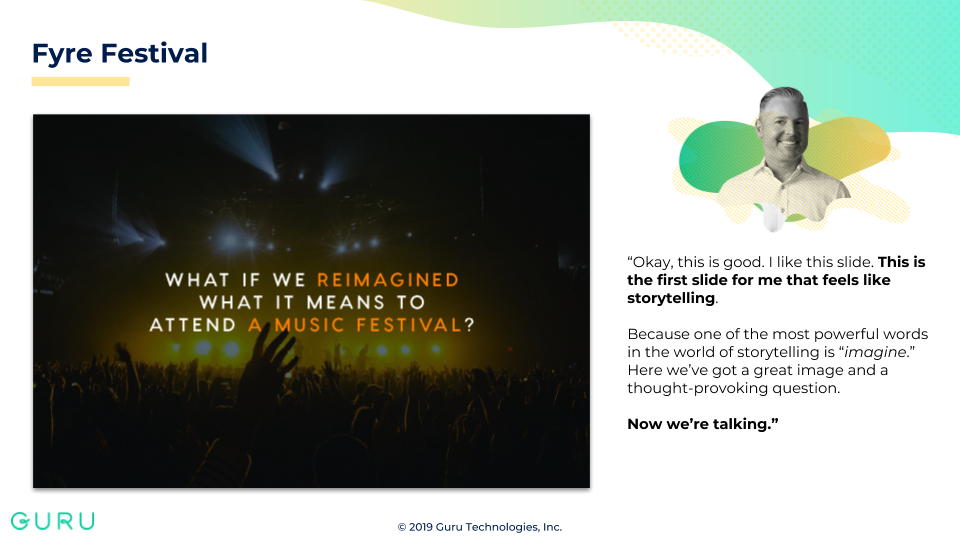 In this case, painting a compelling picture should have been as simple as the Fyre team conjuring up a vision of a reimagined festival experience. To convince an audience that a new festival experience is necessary, they should have laid the foundation by giving examples of what the current festival experience is like – because again, it’s all about that contrast. The audience needs to be heavily bought into the problem before they can wrap their heads around a solution. Then comes the natural opportunity to introduce the shift the storyteller wants to make. And then comes the time to introduce who’s going to make that shift, and in this case that’s Fyre and the new Fyre Festival.

Instead, the Fyre team leads with themselves right from the get-go. The first slide of substance in any pitch deck should not be about you as the presenter. Unfortunately, it doesn’t get any better from there. The whole Fyre deck is ridiculously self-serving. The creators of this deck are all about me, me, me. A great story should be about the audience. If you’re going to tell a story, tell a story that gets us bought in and then then take us through the tactics. Fyre didn’t do that. They talked about themselves, then kind of alluded to an interesting story about a new music festival experience, and then they were like “Look at all this shininess.”

Because aren’t there enough music festivals out there? If all of the sudden Fyre Festival is going to compete with Coachella and all the other big festivals around the world, what makes it different? Why do we need another festival? What’s wrong with today’s festivals and how is Fyre going to be better? That’s the story they needed to tell, and we didn’t get that at all from this pitch.

So what did they get right?

The one thing Doug will concede is that whoever created this deck understands sizzle. Because the imagery, and even the font that they use, is pretty. Their target audience is a little hard to discern from this deck, but if anyone on the receiving end of this pitch is enticed by this aesthetic and the thought of bumping elbows with celebrities, the visuals in this deck strike the right note.

The hype video is beautiful and well-made, and as we all know, drove a lot of interest for them. They executed an extremely buzz-worthy social media blitz. There is no doubt that they created a lot of hype and interest for this event, basically out of thin air.

And of course, there were a few glimmering spots in the deck where a compelling story could have emerged, but they just couldn’t quite get there. The state of this pitch deck gives some heavy foreshadowing to the state of the doomed festival itself.