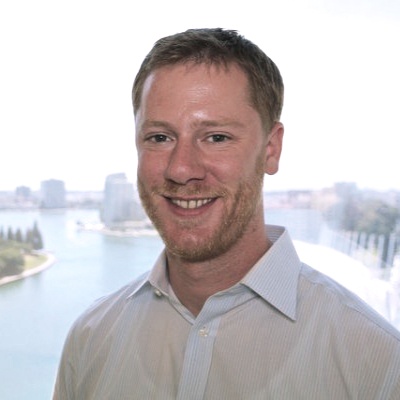 We saw both expected and unexpected themes emerge over the course of Empower. In uniting some of our industry’s top thinkers, we expected a few key topics to come up. For example, we at Guru know that support teams are revenue generators rather than cost centers, and we already know that Shopify thinks so too. But we were delighted to see a few unexpected themes arise during the event’s keynotes and sessions. Here are the top trends we noticed:

The power of people

One concept that came up consistently throughout the sessions was the importance of people. Empowering and investing in people is the key to achieving success. As Rick said, “Our customers are buying us, not just our products.”

The hype around AI has many people worried that their jobs will be replaced by machines, but as we believe at Guru, and as many Empower speakers echoed, AI is only as good as the people it serves. Kristen Swanson, former Director of Learning at Slack, mentioned a Harvard Business Review study that asked 11,000 employees and 6,500 managers, "Are you worried about the robots coming to take your job?"

And those people said, as paraphrased by Kristen:

Jake Saper, Partner at Emergence Capital, also chimed in about not forgetting the importance of people when it comes to AI. Emergence Capital’s thesis around AI resides in coaching networks, which use machine learning to coach workers on how to do their jobs better while they do them. According to Jake, the key to coaching networks is that they are most applicable in human-to-human jobs. Because that's where the data sets are the most dynamic.

“So if you're thinking about what to tell your kids in terms of where to study and what to do, I would encourage them – and I'll be encouraging my daughter – to go into human-to-human jobs that are highly reliant on creativity. Because creativity is going to be the harder thing to automate away.” – Jake Saper, Emergence Capital 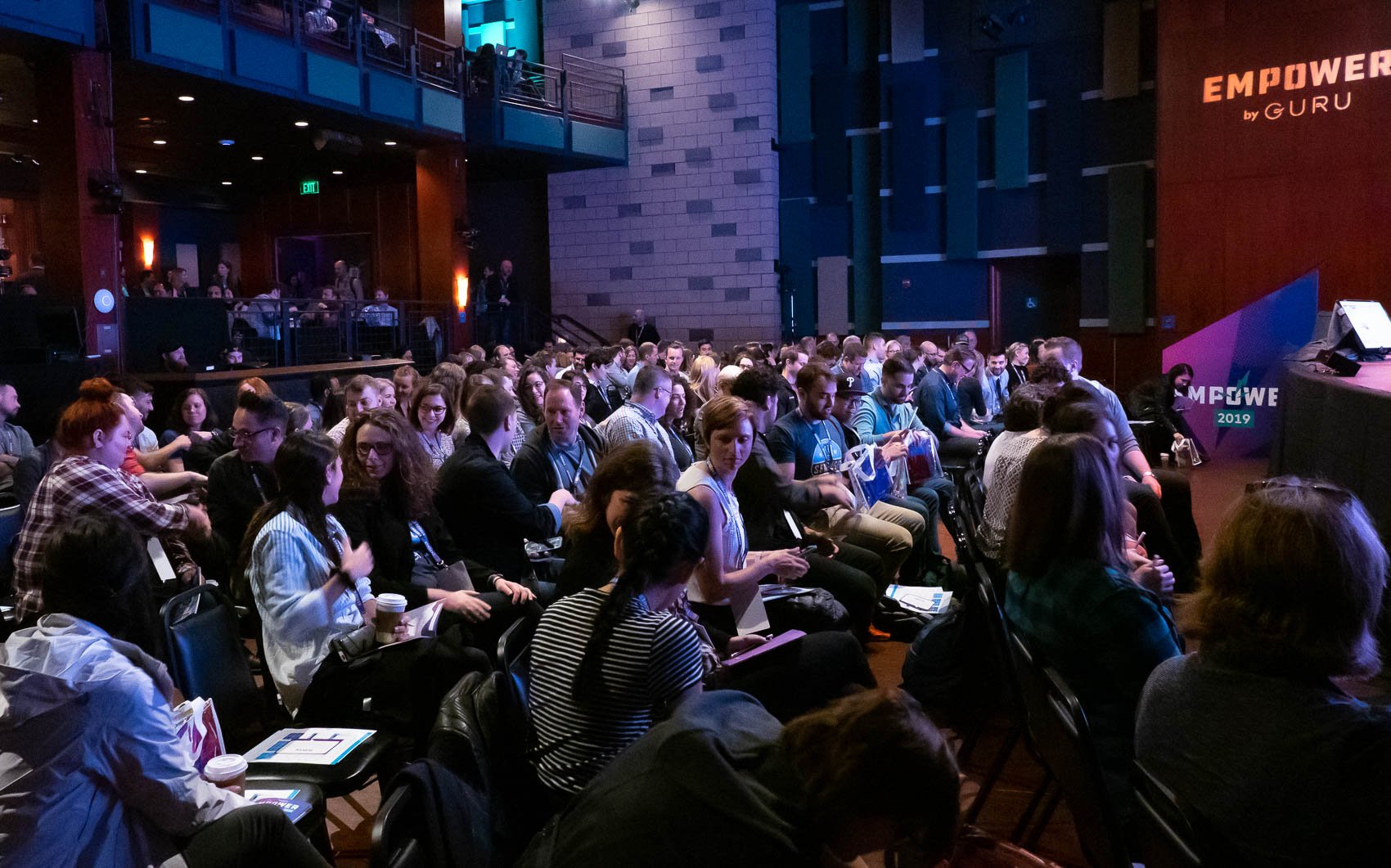 The power of company culture

Company culture is central to our mission at Guru, so it was exciting for us to see so many of our partners and industry thought leaders focused on culture as well. Rick spoke about Guru’s core values in his opening keynote, explaining how culture was just as important as product in founding our company: “As we would go on to think about starting Guru and thinking about what problems we wanted to solve, we didn't want to just create products alone. We also wanted to create a company that people loved working at.”

At Guru, we weave core values into our interview process, and so does SalesLoft, according to CEO Kyle Porter. Kyle spoke about what he calls “organizational health:”

“Organizational health is cohesion amongst your leadership team and staff. It's clarity around your purpose, your mission, your values, and communicating that out to everyone in the organization. And it's having the systems and structure to run a company in a healthy way.” – Kyle Porter, SalesLoft

Kyle spoke about the importance of organizational health, which includes company culture and core values, and how it was missing in his first iteration of SalesLoft. He actually had to scale SalesLoft back to square one and start fresh, hiring the second time around with organizational health top of mind.

Kristen Swanson also touched on the importance of corporate culture. She told a story about reading Slack’s S1 on a Friday night, and directly written into that S1 was the statement, "Our corporate culture has contributed to our success. And if something happens to that culture, because that's how important learning and culture is, our future business results can be harmed." For Kristen, who was formerly the Director of Learning at Slack, that was a true empower moment. When it comes to business results, learning and culture can have a fundamental impact on what you are able to achieve as a business. 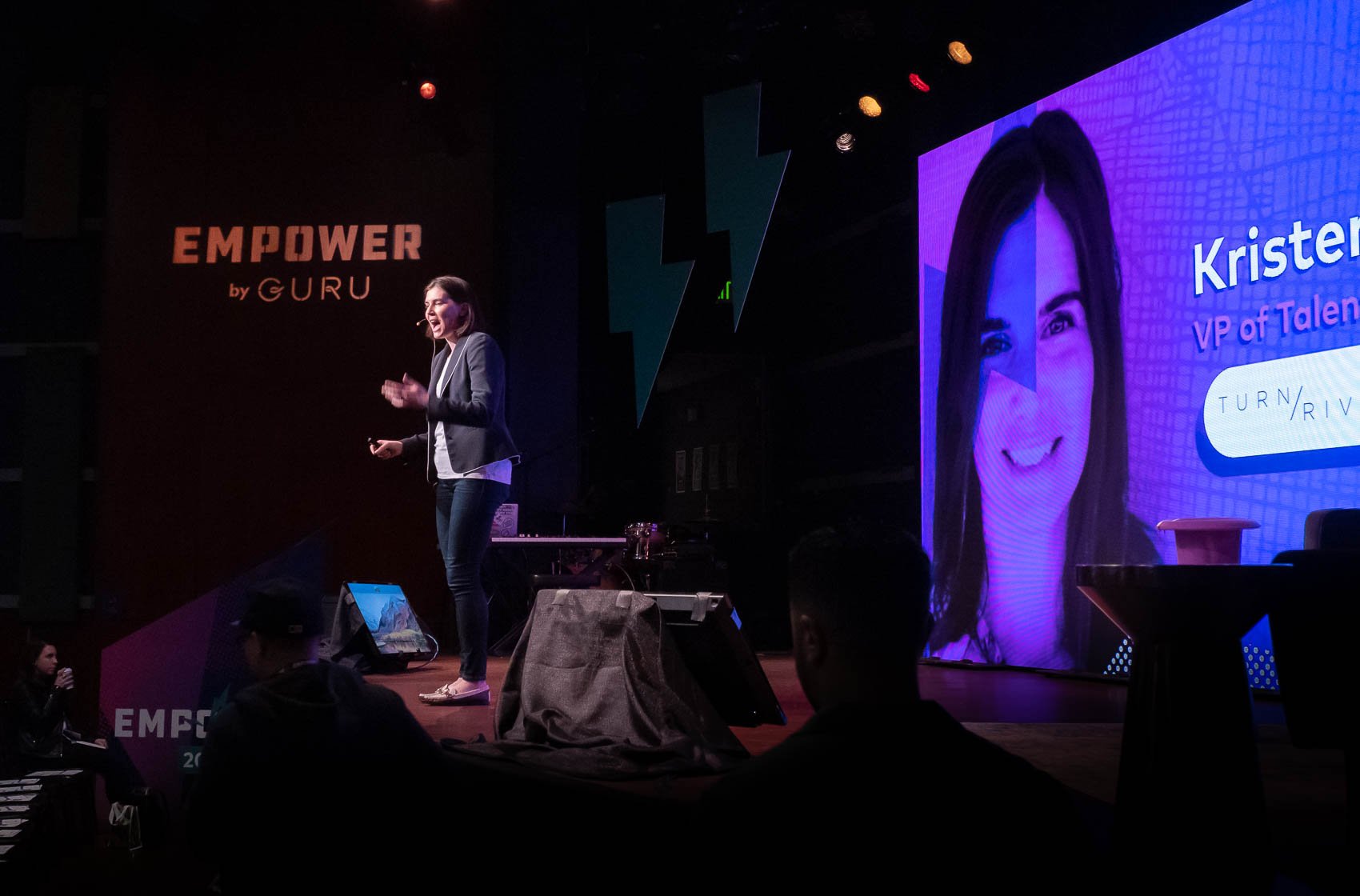 The power of networks

The knowledge network is a cornerstone of Guru’s mission, and the concept of a network effect appeared many times throughout the course of the conference. Networks came up over and over again: the power of a network – how the whole is greater than the sum of its parts.

Shane will be the first to tell you that he doesn’t hold any records for three-pointers or rebounds. He doesn’t even know his own stats. The value he brought to the teams he played for over the course of his career came from being a team player focused on the greater good of the team – of the network. 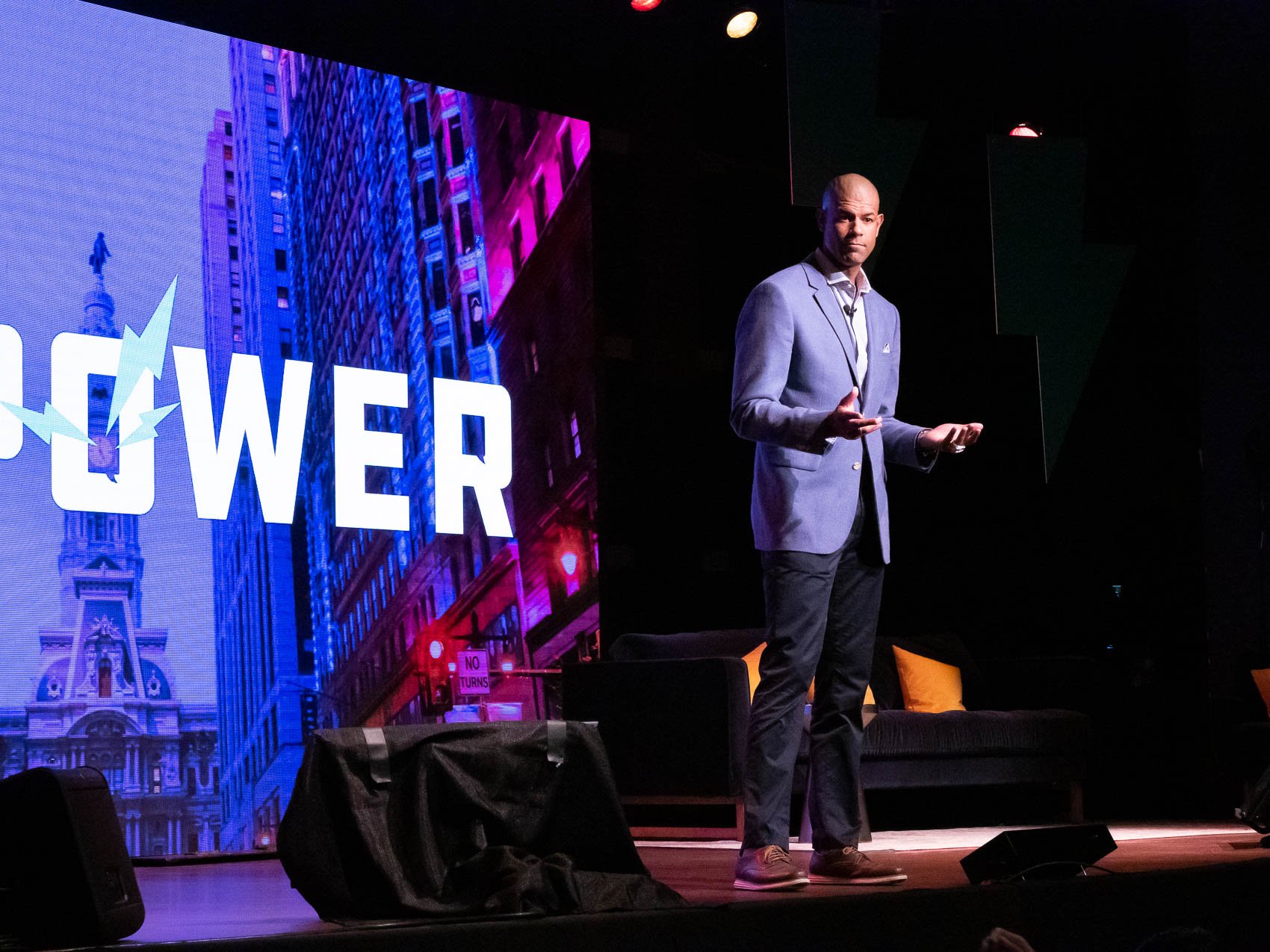 Matt Wesson from Zoom painted a similar picture. He referenced a Swiss biologist’s life work studying the metabolic rates of cows (bear with us), and how his model can reliably predict the metabolic rates of thousands of animals. His model can even reliably predict things on larger scales, like electrical consumption in cities. The only thing that doesn’t fit this model? Creativity. Any data point having to do with creativity grew exponentially, rather than linearly. Which means that it is a scientifically observed fact that the larger your creative network is, the more creative you are, and the more creative your network is.

Again, the network benefits from the contributions of individuals and expands exponentially. Matt left us with the sentiment:

Jake Saper also harkened back to the network effect when talking about coaching networks: “What's cool about coaching networks is because you have sensor data, you can actually understand what is a rep saying and what is the actual outcome, and what is the creative thing the rep has done to make a close happen. You can capture that creativity, and you can spread it to everyone else in the network. So the concept here is really, really powerful. So, by one person anywhere in the world doing their job, and just by doing their job, they can inadvertently be training everyone else in the network.”

The power of fun

Now, it wouldn’t be a Guru event without a healthy dose of fun. Fun was a theme that we did anticipate, and we were not disappointed. Empower speakers had fun with their presentations – especially Kyle Porter from SalesLoft and John Ley from Square who shared stories of teenage shenanigans as parts of their Empower moments. Our hosts Christine and Wes had fun with their emceeing duties – showing off their wit and aim by pelting the audience with socks and candy – and everyone had fun busting a move at the Empower Bash at the end of the first day.

We pulled in a taste of Philly by welcoming Xtreme Kre8tionz, am x-tremly talented drumline group, and tapped Hip Hop Fundamentals, a break dancing group, to get the dance floor warmed up while DJ Caution played all of our favorite throwback jams. We also enjoyed the musical stylings of Mobile Steam Unit throughout Empower, occasionally geeking out over some of their techier lyrics (check out the official theme song they made for Guru on their homepage!).

We closed out Empower with a facilitated workshop to help everyone identify the most relevant, actionable takeaways from the past two days and turn them into an action plan they could take back to work with them and start to implement right away. Miss the Action Planning session? Here's the framework template that you can copy and adapt!

Empower 2019 was a blast and we couldn’t be more thankful for all of the speakers, attendees, sponsors, and team members who came out to make it possible. We couldn’t have done it without our sponsors: Zendesk, Gainsight, Solvvy, Front, MaestroQA, SalesLoft, Boldr, Stella Connect, and Pacific Western Bank. Thank you all for being a part of our first conference! (Thank you too, Gritty.) We are still wrapping our heads around all of the great insights that were shared over the course of these two days and will continue to distill learnings in blog posts to come. Keep an eye out for in-depth breakdowns of our sales- and CX-focused tracks, along with session decks and video recordings for attendees.

Thanks again to everyone who came out, and if we missed you – Empower 2020 will be here before we know it!

Chris Anderson
Let us know what you think!