Scary Customer Stories to Tell in the Dark

Want to terrify everyone at your work Halloween party? Ask them if they’re sure they know where to find the latest positioning information. Here at Guru, we LOVE a good scary story, so turn down the lights, grab some candy corn, gather round the Keurig, and prepare to be spooked. 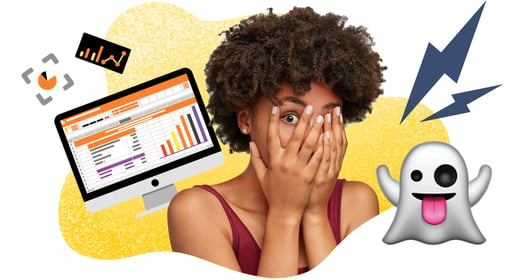 Submitted for the approval of The Midday Society, we present…

The Tale of the Spreadsheet from Hell

In 2018, Chad Trabucco, Head of Sales Enablement at Glint, discovered he had a problem. The sales asset management (SAM) spreadsheet he'd spent the last two years of his life lovingly maintaining had stopped making sense to him. “One of my first jobs was to map the universe of content, so I built out this amazing spreadsheet (SAM), and it was essentially a table of contents that linked to where everything was in Google Drive.” The SAM spreadsheet was Chad's baby, little did he know the baby was a monster.  The spreadsheet that had once been a life saver turned into a TERROR.

The SAM was so data- and link-heavy, that it started to take upwards of a minute to open. Sales knowledge stopped being captured there, leaving Slack noisy, and full of repeat questions — also known as SCREAMS OF PAIN! As the SAM turned against them, Glint's reps started to lose competitive deals while stumbling over softball questions, like examples of Glint customers in a particular industry.

Was Chad able to save his team from… the spreadsheet from hell?

The Tale of the Faraway Team

5 long years ago, Shopify was starting to expand its support team. The support team’s goal? To take a consultative approach to every support interaction by solving the immediate need, then opening a discussion about the merchant’s business goals to figure out how else they can help them succeed. They wanted the end result to be happier, more successful merchants who drove more revenue for Shopify. But then, they realized something was… wrong.

“Shopify started hiring mostly remote support reps. The product was growing tremendously, and we realized that we didn’t have a single source of truth for our processes, procedures, or best practices,” explained Dana Tessier, Director of Knowledge Management. With a 90% remote team, how could knowledge make its way to those who needed it most?! Would remote workers be [dun-dun-dun] TRAPPED IN THE DARK FOREVER?

Did Shopify get the light of knowledge to… the faraway team?

The Tale of the Missing Analytics

In 2017, Lever’s revenue teams were humming along, working in a comprehensive tech stack to close deals and increase their win rate, when suddenly, they realized they’d been WORKING BLIND!

Lever’s marketing team had been putting out knowledge — a lot of knowledge, including product documentation, security information, externally focused one-sheets, and testimonials — on Google Drive, but sales reps didn’t know how to find the best collateral to use without pinging someone. And that trouble went both ways, as the marketing team realized they didn’t have any visibility into which assets were actively being used by the sales team, or at what frequency. Were they even having an impact? And how many deals were stalling out in the time it took to find the right data and collateral? WHAT EVIL FORCE had stolen their content analytics?! Had they ever even really been there?

Could Lever ever recover from… the missing analytics?

We hope you didn’t get too scared during our storytelling hour, but if you felt a shiver of recognition down your spine, we invite you to clear out the cobwebs with a new knowledge management system.

How to Create the Offboarding Plan You Needed Yesterday